Home » How do I Avoid Medicare IRMAA

How do I Avoid Medicare IRMAA

More and more retirees who are enrolled in Medicare are finding out the hard way that their income is leading to much higher premiums and much lower Social Security benefits.

They have reached this little unknown tax in retirement called IRMAA and now they want to know how to avoid it.

After this point avoiding IRMAA is extremely simple in theory, but as you will see extremely difficult to do under current financial planning mantras.

IRMAA, which is short for Medicare’s Income Related Monthly Adjustment Amount, is, simply, a tax on income through that federal government program.

The Federal Code of Regulations defines IRMAA more eloquently as it states that it is:

“An amount that you will pay in addition to the Medicare Part B and D standard monthly premium plus any applicable increase in that premium for your Medicare Part B and Part D coverage when your modified adjusted gross income is above a certain threshold”.

Basically, the more money you have that the Internal Revenue Service can see and tax the more you will pay for your Medicare coverage after certain thresholds.

Who is IRMAA for

Medicare’s IRMAA is not for subject to Medicare’s Part A coverage or even Supplemental Coverage (Medigap Plans).

According to Social Security’s Program Operations Manual System (POMs) IRMAA is for Medicare beneficiaries enrolled in:

What is the process of determining who reaches IRMAA

Every year, about 2 months prior to the upcoming new year, the Social Security Administration will send your Social Security Number as well as a request of your income information from the IRS to determine if you reached IRMAA.

Once the SSA receives income information back from the IRS they will mail out notifications as soon as possible.
The notifications will inform the Medicare beneficiary that the decision is still subject to review and can be reversed by “qualifying circumstances”, if provided.

At this point anyone who has received this notification has 60 days from the received date to file an appeal to contest the ruling. If not appeal is made there will be at least 2 more notifications explaining what will happen in terms of higher Medicare premiums and lower Social Security benefits.

For those who are new to Medicare in a given year the process is similar, with the exception that the SSA, once you apply for benefits for the first time the SSA will request your income information from the IRS.

An example of the process for those already enrolled into Medicare:

In 2022, with the upcoming year of 2023 the SSA will, at the end of October, send your Social Security Number to the IRS electronically and request your income information.

The IRS, since you have not submitted your 2022 tax-return yet, will look at your tax-return from 2021 to see if you have in fact reached an IRMAA threshold.

An example for those newly enrolling into Medicare during the year:

The year is 2022 and you are enrolling into Medicare for the first time that year. Once your request to enroll is received by the SSA they will contact the IRS by sending them your SSN while asking to know if your income has reached an IRMAA threshold.

For those who are notified that they have reached an IRMAA threshold the process of filing for an Appeal can be found here.

For those who are new to Medicare, if they reach IRMAA should always appeal. For those who have been enrolled into Medicare for a few years or longer it is highly recommended that you meet with a Certified IRMAA Planner before filing any appeal of IRMAA.

What is income for IRMAA

The key to IRMAA is income and according to the Program Operations Manual System (POMs) of Social Security income for IRMAA is defined as your modified adjusted gross income or MAGI.

Social Security goes defines MAGI as your “adjusted gross income (AGI) plus any tax-exempt interest” you have or the amounts listed on “lines 2a and 11 of the 2021(2) IRS form 1040”.

Some examples of income used from IRMAA are:

Taxable Social Security benefits, Wages, Interest, Capital Gains, Pension and Rental Income, Dividends and any distribution from any tax-deferred investment like a Traditional 401(k), IRA or 403(b).

IRMAA is not just a one and done when it comes to the to how much income is too much as there are multiple thresholds with corresponding surcharges for income.

In 2023 the IRMAA thresholds and surcharges, according to Medicare.gov are:

How to Avoid IRMAA

Now that you know what the process is when it comes to how the Social Security Administration determines who will be in IRMAA as well as what it takes on your end in terms of income to reach IRMAA, avoiding it, at least on paper, may be a lot easier than you think.

The simplest way to avoid IRMAA is by having income that the IRS does not recognize at all.

This can be accomplished by instead of investing into and having assets in financial vehicles like Traditional 401(k)’s and IRA’s you use assets such as:

The harsh reality is that assets that are considered to be tax-deferred like Traditional 401(k)’s, IRA’s and 403(b)’s will be used against their owners in terms of Medicare.

Once you Social Security benefit becomes taxable that too will also count towards IRMAA.

You will eventually reach IRMAA if you have tax-deferred assets

The reason why Roth Accounts and Life Insurance work in helping you avoid IRMAA is because you are paying tax today on the money going into them. Later when you want to access the money there are no taxes to paid as the IRS never recognizes those distributions.

Due to this your Social Security benefit NEVER becomes taxable, if you planned accordingly, and with that you will NEVER reach IRMAA.

Are you a Financial Professional
and want to learn more? 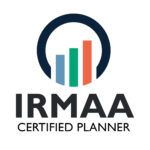